Tiqit Computers has created what conventional wisdom in the computing industry considered impossible with today’s technology – a handheld computer that functions as a desktop PC and can be used while walking: the eightythree. Combining the portability of a handheld device with the compatibility of a Windows PC, the eightythree immediately meets the full needs of enterprise customers. It runs any enterprise standard operating system (OS) – Windows, Linux or UNIX – which lets users employ the same software and applications, including industry-specific packages and custom-designed software, that reside on their desktop PCs. The end result is a more mobile and efficient enterprise with reduced IT costs and simplified administration. 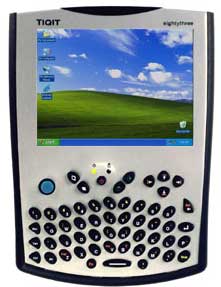